I have these guy friends from college who when together in one room transform into more sardonic versions of Mitch Hedberg meets Louis CK meets The Three Stooges (well maybe just Shemp.) Unless Marvel has come out with a new summer movie, you’ll find these guys at the theater watching Rifftrax Live shows.

Fangs of The Living Dead

What is a Rifftrax? Well…let me explain really quickly. Do you remember those guys who had that show on Comedy Central…and then on the Sci-Fi channel where a guy watched a horribly cheesy movie and discussed it live with two “robots”…and then it got cancelled? Well “Mystery Science Theater 3000” was that show and its Emmy-nominated creators have brought back its format in live performance theater meets live streaming.

Although Rifftrax does not spotlight the old characters Crow T. Robot and Tom Servo, creator and lead Mike Nelson honors their memories by inviting their voice actors Kevin Murphy and Bill Corbert to join him on stage to watch and “riff” (heckle) quite possibly the worst B-list movies ever produced and distributed. 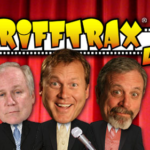 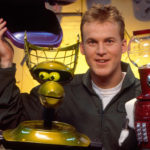 Here’s a list of the most recent live-streamed theater showing titles that I’ve had the pleasure of viewing: “Birdemic: Shock And Terror,” “Santa Claus Conquers the Martians,” and “Night of the Living Dead.”

The beauty of these events is that they are streamed live, which means the comedy is fresh, the atmosphere is energetic, and although you may be in a dark room with 100 other people, you’re technically in a virtual dark room of thousands. Rifftrax has proven to be an innovative new medium for live comedy and movies. It has a an emphatic niche following but is growing in popularity quickly.

So back to my guy friends, my own personal comedy nerd community. My friends make a night out of these events and I couldn’t be happier to share these horrible movie experiences with them. Rifftrax also sells these videos on their website along with downloads, Rifftrax shorts, and other great swag.

If you’re looking to enhance an otherwise boring movie night, impress that girl with a comedy date, or need an excuse to beat the heat with theater air conditioning, Rifftrax is definitely a first-rate option.